By Richard and Debby Thorne

I started working for Portsoy Community Enterprise last August, and my wife, Debby joined me here in September following the sale of our house on the Isle of Mull.

We are both keen wildlife and bird watchers and we’ve both been very pleasantly surprised by what we’ve seen since we arrived.

Back in August, when I started working from the Salmon Bothy office it was great to be able to overlook the sea and the beach. To be able to listen to and watch over the links bay is an inspiration.

Now, I’m no expert, I leave that to Debby, but even I can recognise the many wading and shore birds and those who just bob about in the sea. The main suspects for gulls are; Herring, Black Headed and Common Gulls, these are always out there but when some change plumage with age and the seasons, I do tend to get confused. There can be the odd lone visitor and Glaucous and Icelandic gulls have been seen.

Around the shoreline and on the grass outside the office you often see Oyster catchers and overhead there might be Curlews, sometimes alone but also in flocks with their eerie call. Sometimes If I keep focussed on the shoreline, particularly amongst the seaweed, I’ve seen Turnstones. We also see Redshanks with their stunning red legs feeding as the tide recedes.

These will often be joined by ringed plovers frantically feeding. Rock or Meadow Pipits, Pied Wagtails can be seen around the Caravan Park and Starlings are frequent visitors. We’ve not amassed anything like a big murmuration yet, but it is growing. Another little bird I look out for around the shoreline, particularly where a burn may run out is a grey wagtail. Don’t be fooled by the name – yes it is grey but has a beautiful yellow frontage and a distinct bobbing action as it looks for food.

When first arrived, we lived by the old harbour in Portsoy, and regularly saw a lone Redshank in the old harbour and a diver, which I think is a Cormorant around the new harbour, bobbing on the water and then taking an Olympic style dive into the sea looking for fish. At least twice from our upstairs windows the pod of bottlenose dolphins came past the harbour entrance, heading towards the Black Isle and into the Moray Firth. Also out in the bay, a lone seal can sometimes be seen, this chap looks very much like a buoy when he just floats vertically in the sea, but he (or she) is definitely out there sometimes. 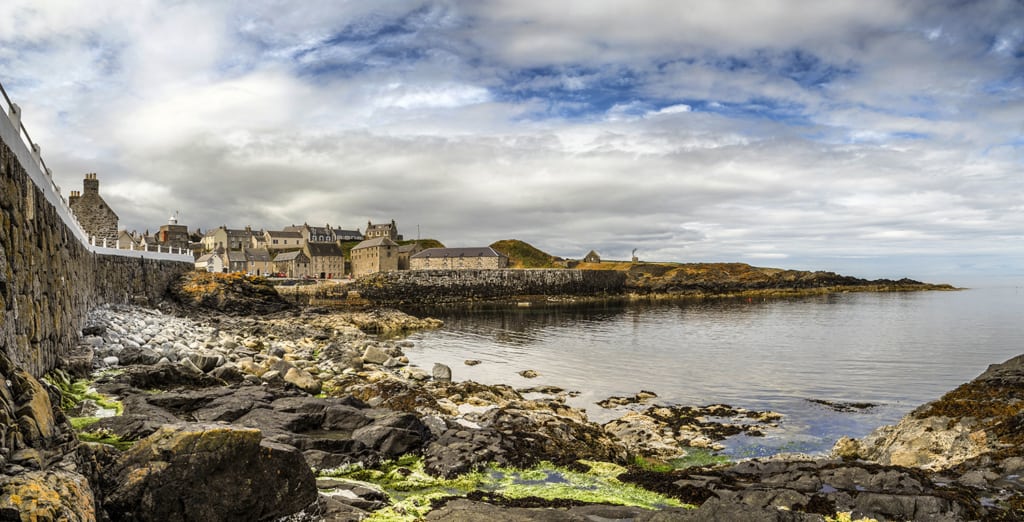 Inland there are many other birds and animals to be seen, I’ve been surprised at the range of corvids that are here, and I regularly see Carrion Crows, Rooks and Jackdaws in our garden, which is a surprise. Out in the country Buzzards can be seen and there is the rumour of a Peregrine Falcon in the area, but I’ve not seen it. I have seen a Sparrow hawk, which skulks around our garden fence as though checking the menu (bird feeder) to see what’s on offer.

During the winter, especially when the snow was on the ground, we were delighted to see so many Fieldfares and Redwings visit clearing any berries or fruit that was still around. We also were lucky to have a small group of yellowhammers come to feed too. We took part in the RSPB Great Garden Birdwatch and noted all the usual garden birds including goldfinches, siskins, greenfinches, house sparrows, dunnock, song thrush amongst them, which was very encouraging as our garden has no grass in it yet, but we do have feeders.

On the mammal side of things I’ve seen many a deer, Roe I think, and there are badgers, but unfortunately I’ve only seen the odd squashed one. There could well be red squirrels in the woods around Portsoy, but the only ones I’ve seen have been near Lossiemouth at Loch Spynie. The burn between the Sail Loft and the Caravan Park, might be suitable for an Otter, but I’ve not seen any. It might be just a bit busy for them, but the conditions are certainly OK, with a good fresh water supply which enables them to keep their coats in optimum condition, plenty of cover and of course access to the sea. I have seen a Pine Marten which was a good spot for me. I’m told that sometimes they raid bird feeders in the town, but the one I saw was away up in the woods

When we are able to, we visited a few great wildlife places near Portsoy, RSPB Troup Head near Gardenstown is great for nesting Gannets and Puffins when they’re here from springtime, and if you head over the border into Moray, Lossiemouth is well worth a visit especially the estuary of the River where you can see a huge array of wildfowl. During winter, it is home to hundreds of wigeon and teal as well as godwits and curlew.

Burghead is a lovely harbour to visit and Eider duck and Great Northern Divers can be spotted here. I even saw a Phalarope in Burghead harbour, but that was a rarity. It is also a great viewpoint to watch for cetaceans including the local bottlenose dolphins that spend their time in the Moray Firth, as well as minke whale, porpoise and common dolphins. Hopeman Harbour is a great lookout spot too for birdlife as well as passing cetaceans.

Autumn is the time for migration, and we are fortunate to see the flocks of pink footed geese, whooper swans and barnacle geese fly over in their classic ‘V’ formation as they arrive to spend winter here. As they depart at the end of winter, we can look forward to the arrival in early spring of the magnificent osprey who choose to breed in Scotland. Spey Bay is an excellent spot to watch them fishing where the River Spey meets the sea. Springtime we can look forward to the arrival of our swallows, house martins and swifts. Our trees and shrubs will be full of the calls of warblers and our coastline dotted with wheatears and terns. 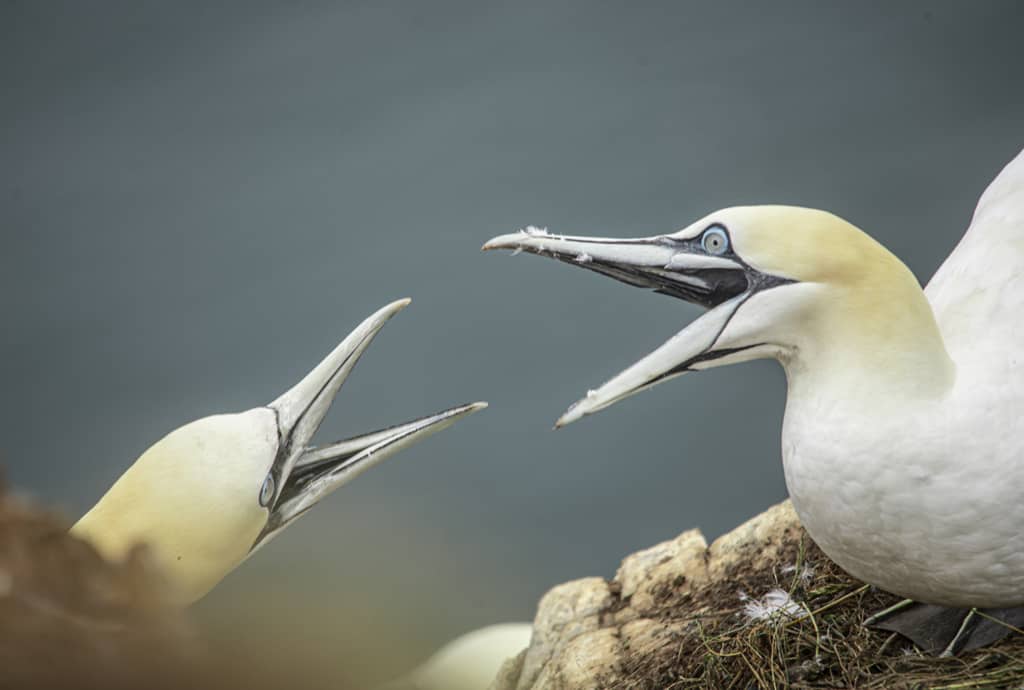 If you take a walk towards Sandend along the cliff top there are many great sights to see. In the fields there are crows, pigeons, and other small brown birds flitting around the gorse bushes and in the fields. I think I’ve seen hares, certainly rabbits, but as I’ve not been here in Spring yet, I’ve not seen any displays. There’s a rocky cove that you pass about half way between Portsoy and Sandend which is worth a closer look (not too close though). On the rocks is home to Kittiwakes and Cormorants which an amazing site and the noise and smell is memorable too.

If you head out of Portsoy on the coast path towards Whitehills this becomes quite rugged but is well worth the trip. The odd Gannet and more Kittiwakes can be seen along here, along with Guillemots and Razorbills out in the water around the rocks.

I’ve seen Razorbills close to the beach by the Sail Loft as well. This is a regular lunch place for me. When the weather is bad and the wind is blowing hard from the north, the waves crash in from the sea onto this beach, and all the gulls congregate around the sheltered edges and seem to enjoy going up and down with the waves, just before they break on the shore. When the good weather returns, the shoreside wading birds come out and can be seen searching for food in the seaweed and rocks.

Portsoy and its close neighbouring communities are fabulous places to explore. If you like wildlife watching there’s plenty to see, and most just appear as you walk. I’ve been really surprised at just how pretty and unspoilt the area is, and the weather is amazing, especially when compared with the west coast, plus no midges, which must make it worth the trip just for that.

Of course, this is only some of the bird and wildlife that can be seen – the best bit is not knowing what you might see – just keep your eyes peeled!